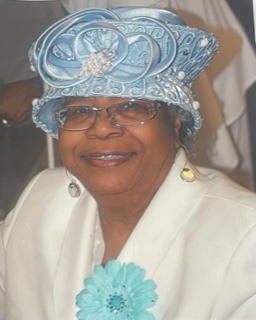 Mable Ann Alexander (ne’e Johnson) was born in Alton, IL to the union of the late Benjamin Lee Johnson and Myrtle Atlyne (ne’e Cannamore) on March 31, 1939. She was the youngest child of nine and all of her siblings preceded her in death. Mable accepted Christ at a very early age and attended The Church of House and Prayer in Alton, IL.  She was active in the music ministry where she played the piano for her church for many years.

Upon relocating to Cincinnati, OH, she united with New Jerusalem Baptist Church. She later joined Southern Baptist Church before coming to Greater New Hope Missionary Baptist Church many years ago. Mable was active in many church ministries. She served faithfully on the Deaconess Board, Children’s Church, Vacation Bible School, General Mission, Marriage Ministry and she was always willing to serve whenever called upon.

Mable was educated in the Alton public school system and graduated in 1958, upon graduating, she attended Southern Illinois University, Carbondale.  Shortly afterwards she married and relocated to Cincinnati, OH where she continued her education at the University of Cincinnati and earned a B.S. in Education. She continued her education at Xavier University and earned a M.Ed. She also successfully completed Administrator Development Academy from the University of Cincinnati.  Mable enjoyed a life-long career working within the Cincinnati Public school system.

In addition to her love for God, family and friends, she enjoyed reading, sewing, cooking, and traveling. She never met a stranger and was often volunteering within the community. Among many of Mable’s accomplishments, she was a proud member of Delta Sigma Theta Sorority, Incorporated Cincinnati Alumnae Chapter.

Mable was loved by many, will be missed by many!  May she rest easy in peace.