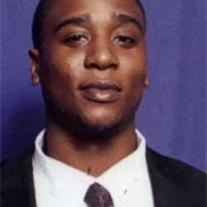 Damien Taylor was born on January 24, 1983 in Cincinnati, Ohio to parents, Robert Taylor, Jr. and Sharon Harney. He attended Princeton (Cincinnati, OH) and Lakota West (West Chester, OH) High Schools. In the summer of 2001, Damien attended the Job Corps program in Albany, Georgia where he obtained an Electrical Technician certificate.
Damien was a God-fearing man who professed his faith in Christ to many. Damien was a kind-hearted person who loved his family and would do anything for them. He also loved his children immensely and would go to the ends of the earth for them. His charming personality and infectious smile captured the hearts of many. His humor and witty ways would have his family and friends falling over in laughter. Damien loved playing basketball and music.
Damien is survived by: his parents, Robert Taylor, Jr. and Sharon Harney; two sisters, Marlita Taylor of NC and Erica (Matt) Thompson; two brothers, Ryan Harney and Rayshawn Taylor; two child-ren, De?Nasia Taylor and Damien Taylor, Jr.; his maternal grandparents, Robert (Nancy) Harney, Sr. and Carol Bates of Charlotte, NC; paternal great-grandmother, Grace Taylor of Winchester, KY; grandfather, Robert (Sandra) Taylor, Sr. of Phoenix, AZ and grandmother, Dolores Taylor; two uncles, Col. Robert (Leslie) Harney of Ft. Lee, VA and Michael (Stephanie) Taylor of Sacramento, CA; two aunts, Anita Harney of Canton, MI and Cheri Ndaw of Hous-ton, TX; and a host of other friends and family.