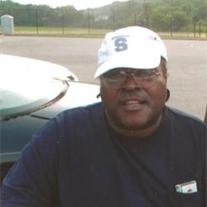 Charles Francis Bates, Jr., was born August 19, 1949 in Cincinnati, Ohio, to the union of Charles Francis Bates, Sr. and Jessie Mae (Franklin) Bates (who both preceded him in death).
Charles was the 4th oldest of nine children born to this union.
Charles was also preceded in death by an older brother (Charlie), a sister (Alice), and an only son (Dion Francis).
Charles fell asleep in death, July 3, 2012 at U.C. Hospital surrounded in love and affection by his family and friends who will miss him dearly.
Charles (affectionately known to many as ?Pete?) grew up in the West End neighborhood of Cincinnati and attended the Cincinnati Public Schools in that area.
Pete enjoyed a variety of things and talents, including sports, music, movies and cooking, as well as, yes, eating!
He was also fond of animals, especially dogs.
And Oh, how he kept us rollin? in laughter with his jokes and comedic ways.
There?s a lot that could be said about Pete, but instead of writing it all down in this obituary, we?ll let each one of you here reminisce about your past experiences shared with him.
Charles (Pete) leaves to cherish his memory: two daughters, Roberta Lee (born to the union of Charles and Mary Alice) and Charlene Frances (born to the union of Charles and Ora Mae); four granddaughters, Lydia, Le?Asia, CarJayva and Airyanna; one great-grandson, Demetris; four sisters, Frances, Donnise, Bonnie and Charlene Delores; four brothers, James Edward, Sr., (Doreen), Alfred Lamar, Ronald and Anthony Francis; a very large host of cousins, nieces, nephews, and other family and friends that loved him dearly.